Yoga Meditation Can Positively Impact the Neurochemistry of Your Brain

From mindfulness, zen, and yoga nidra to Buddhist and transcendental meditation, there are countless ways to meditate. But despite the apparent differences that exist between various forms of meditation, the purpose is always the same: less stress, more peace of mind, better focus, greater self-awareness, better cognitive processing, and an overall sense of health and well-being.

Over the last decades, there have been numerous studies that confirm the physical and psychological benefits of meditation. In fact, many researchers believe that meditation has such a powerful impact that it can even change the neurochemistry of the brain.

What is Yoga Meditation?

Meditation is essentially shifting your attention from the outside to the inside. It’s a process of full awareness in the absence of judgment. More specifically, it means being in a state of relaxation in which we are fully aware of our thoughts, emotions, sensations, and reality, without trying to judge or even “block’ them. And so, once we turn meditation into a daily habit, we begin to know our mind better and to control it more efficiently. We learn to interact with ourselves profoundly and intimately.

Meditation means disconnection, quietness, rest, relaxation, self-discovery, and escape from everyday life. It doesn’t have to be tied to a specific religion nor does it need to be performed in a ritualistic manner.

What meditation can provide for us is an opportunity to take a step back from the stress of everyday life and try to put things in a different perspective. In other words, we become exceptional observers of our life; we begin to see the essence of reality, without getting lost in too many details. In short, we learn to look at the whole forest instead of focusing on the trees.

Although people throughout the world have been practicing various forms of meditation for centuries, researchers and mental health professionals have only recently begun to realize the vast implications of this practice. One of the best ways to explore the benefits of meditation is through yoga.

Yoga is an ancient Indian practice characterized by meditation and physical exercise, which can improve the body’s flexibility, significantly reduce stress, and improve our overall sense of health and well-being.

The word ‘yoga’ means ‘union’; a union between mind, body, and spirit. One of the core principles of this practice is that the body and mind can be placed into a state of union and equilibrium so intense that they come together as one.

As one researcher elegantly describes, Yoga is a way of life comprising mental, physical and spiritual attributes to achieve holism, meaningfulness, excellence, and completeness in all walks of human functioning. [1]

Some practitioners believe that the full potential and complexity of Yoga can only be reached in India, its birthplace. For the rest of the world, yoga refers to the ability to adapt and maintain specific postures and facilitate meditative states, resulting in full physical and mental calm.

But even without its spiritual component yoga meditation still holds massive potential for mental health and well-being. As numerous studies have indicated, yoga meditation can play a decisive role in ameliorating depression [1], lowering stress and anxiety [2], and even improving facial emotion recognition in patients with schizophrenia. [3]

A comprehensive report that was published in the National Health Statistics Report revealed that between 2002 and 2007, meditation was the third most used alternative health approach. [5] 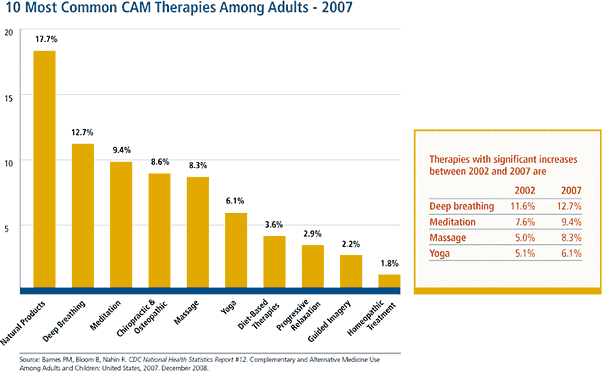 Another report which was published in the same journal revealed an increasing trend in the use of complementary health approaches among adults. [5]

As you can see in this graph, in 2012, yoga was among the top three most used complementary approaches to health.

What these two reports indicate is that, over the years, people have slowly begun to realize the incredible benefits of yoga and meditation and implement these practices into their routine.

The Incredible Benefits of Yoga Meditation According to experts, there are numerous reasons why we should turn yoga meditation into a daily habit. Here are some of the reasons why you should dedicate at least ten minutes a day to this extremely beneficial practice:

Now that you know what yoga meditation can do for your body and mind let’s take a look at how this practice can change the structure and chemistry of your brain.

If you practice yoga meditation on a regular basis, then you can surely affirm that this practice has transformed your way of thinking. If you’ve never practiced it – or if you’re a skeptical thinker – you will probably doubt that this could be possible. Regardless of the situation, it’s normal to want to know more about what’s going on in our mind and body.

According to numerous studies, the benefits of yoga meditation are in part due to the neurochemical changes that this practice can trigger.

So, what are the changes that occur in your brain as a result of practicing yoga meditation regularly?

Gamma-aminobutyric acid, in short GABA, is a neurotransmitter that mediates the communication between brain cells. Some researchers believe that GABA could be the key to reducing problems such as anxiety, depression, and insomnia. From a purely biological perspective, low GABA levels is a characteristic of both depression and anxiety. Fortunately, yoga meditation may be a viable solution to this problem.

A study conducted on experienced yoga practitioners revealed that after a session of yoga, the brain GABA levels increased significantly. Based on this result, the authors concluded that the practice of yoga should be explored as a treatment for disorders with low GABA levels such as depression and anxiety disorders. [7]

Aging is a biological process that produces structural and functional changes at the cell level after the development and maturity periods are overcome. No one really knows why cells age. Some believe cellular aging is due to extrinsic factors such as lifestyle, while others think it’s caused by intrinsic factors such as genetics. As always, the answer is probably somewhere in the middle.

Although experts have yet to discover the answer to everlasting life, some researchers may have found a way to slow down cellular aging. A recent study that aimed to explore the impact of Yoga and Meditation lifestyle intervention (YMLI) concluded that this practice significantly reduced the rate of cellular aging in an apparently healthy population. [8]As in the case of GABA increase, the positive effects on cellular aging can only be experienced when yoga meditation is a constant practice in your day-to-day life.

Serotonin, also known as ‘the happiness hormone,’ has a direct influence on our memory, mood, sleep, sex drive, and many other essential functions of the body.

Numerous scientific studies have revealed that meditation can have tons of benefits on our physical and psychological well-being and some of these benefits are due to the release of serotonin.

Yoga meditation is among the most effective methods of increasing the levels of serotonin in your body. An optimal level of serotonin can alleviate the unpleasant effects of depression and boost our overall mood.

Another way to raise your serotonin levels is through mindfulness-based stress reduction (MBSR). This program was designed by Jon Kabat-Zinn, the father of Western mindfulness practices.

Cortisol, also known as ‘the stress hormone,’ regulates critical processes such as the immune response and metabolism. However, its most important role is in helping the body (and mind) respond to stressful situations.

Elevated levels of cortisol are known to be associated with stress – one of the most prevalent problems of the 21st century.

Over the last decades, researchers and mental health professionals have come up with various techniques that help people manage stress and prevent it from ruining their lives. A 2015 study revealed that practicing yoga meditation may have stress reduction effects, both alone and in combination with psychiatric medication. [9]Whenever you feel like stress has turned your life into a living nightmare, just take 10 minutes off your busy schedule for a quick session of yoga meditation.

Thanks to neuroplasticity – the brain’s ability to form new neural pathways – yoga meditation can lead to substantial changes in the structure of your brain.

As usual, it takes weeks 9even months) for your brain to develop new neural pathways, so if you want to experience the benefits of yoga meditation, you need to practice daily.

Ever since prehistoric times, humans have always relied on their basic emotions to survive and thrive in their environment. And the structure that houses these emotions is an almond-shaped group of cells located deep within the ‘prehistoric’ part of our brain. This is the place where basic functions such as breathing, movement, and metabolism are regulated.

In a sense, the amygdala is your brain’s alarm system; a sentinel that constantly receives messages from your five basic senses and ensures our survival by keeping us out of harm’s way.

According to a 2013 study, the reason why people who practice mindfulness and other meditation techniques experience a significant reduction in stress is that their amygdala appears to be smaller in volume. [10] In other words, it’s possible that yoga meditation, mindfulness, and other similar techniques have a direct impact on the structure of your amygdala.

Melatonin is a hormone known for the crucial role it plays in the regulation of our biological clock. In short, melatonin dictates – in part – the quality of your sleep. Factors such as lifestyle and aging can often influence the secretion of this hormone.

Having so many tasks to complete and so little time available can determine some of us to cut down on our sleep. Add stress, alcohol consumption, and unhealthy eating habits, and the end result is chaos in your melatonin levels.

Once again, yoga meditation proves to be a viable solution for keeping your melatonin at an optimal level. According to a study which aimed to explore the biochemical changes associated with meditation concluded that advanced meditators have higher melatonin levels than non-meditators. [11]

So not only that meditation can silence the worrying thoughts that keep buzzing inside our head at night, but it also increases the levels of melatonin – the sleep hormone.

Here’s What You Can Achieve Through Yoga Meditation

If we could pause for a moment and listen to the needs of our body, if we could honor it with plenty of rest, healthy food, and self-reflection, we wouldn’t experience the unpleasant effects of poor physical and mental health.

Once we become aware of the amazing things our body can do when it’s not under tremendous stress, perhaps we would pay more attention to its needs.

The body will always guide you towards what it needs most. All you have to do is pause for a moment and listen.

The practice of yoga meditation will make you aware of your uniqueness as a human being, of what differentiates you from others. It will help you gain a clear perspective of who you are, what matters most to you.

You will no longer care about what others think or say, and instead, pay more attention to what you believe, think, feel, or say.

In time, you will become more responsible and caring towards yourself. Acceptance – that’s the ultimate consequence of practicing yoga meditation regularly.

Once you turn yoga meditation into daily practice, you begin to have a disciplined lifestyle. It won’t be easy at first, but if you’re patient and determined enough, meditation can become a part of your daily life.

It is said that the mind controls the body. Yoga meditation teaches you to breathe and relax so that you can regain control over your mind. This mind-body connection that yoga meditation facilitates will eventually lead to increased health and well-being.

Most people who resort to yoga for meditation discover in time – often pleasantly surprised – that the general condition of their body and mind has improved significantly. The body gains more flexibility, and the mind becomes more resilient to stress, anxiety, and depression. Overall, yoga meditation has proven to be a viable alternative therapy that complements modern medicine.